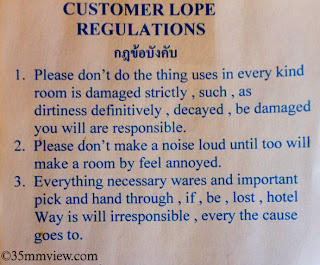 Genuine notice from my hotel room taken whilst on a recent photographic jaunt to Krungthep...!!! 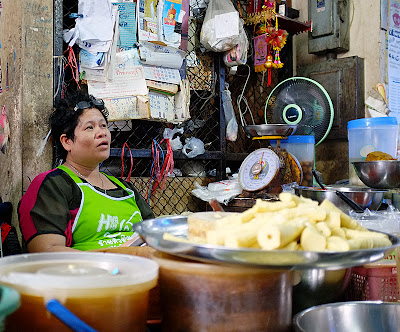 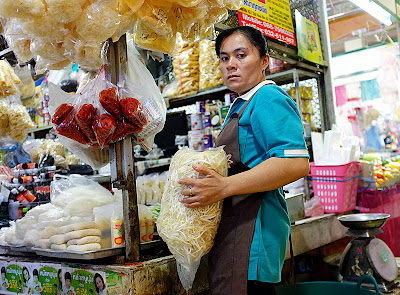 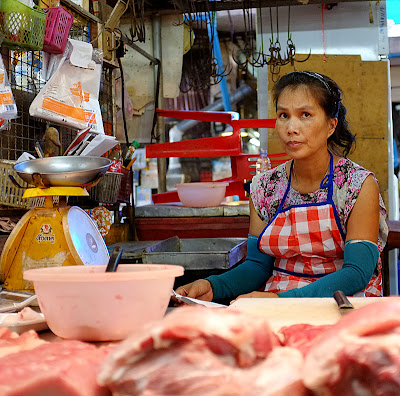 Three pictures of market sellers taken early one morning in Hua Hin fish and meat market. I could (and did) wander around this market for hours and must have fired off about 500 shots.

Every corner I turned presented a host of amazing picture opportunities. The light was often diffucult to work with but I suppose if it was easy it wouldn't be so rewarding when you get it right.
No comments: 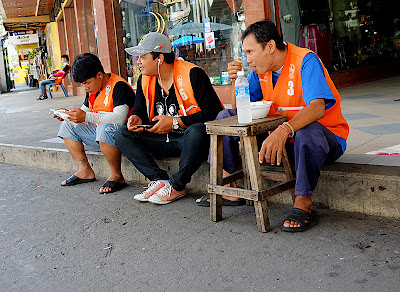 Three Bangkok motorcycle taxi drivers take a break for a well earned snack and a chat.
No comments: 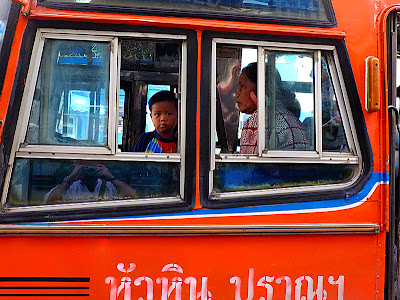 This is actually a self portrait. If you look in the lower left hand window you can see me talking this picture. Of course I had planned it this way. 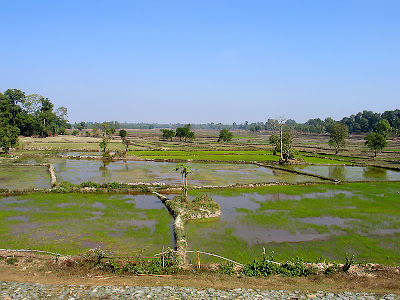 Rice paddy fields as far as the eye can see. Carefully tended by a dedicated band of workers. Its back breaking stuff as most of the work is done in the stoop position and of course a big floppy hat is de-rigueur to fend off the raging afternoon sun.
The normal rice growing period is between July and September but can vary between regions. The above picture was actually taken out of that season bracket and as a consequence is not as green and picturesque as it will be in a few months time. I won't be there then so you'll just have to be make do with this picture instead. 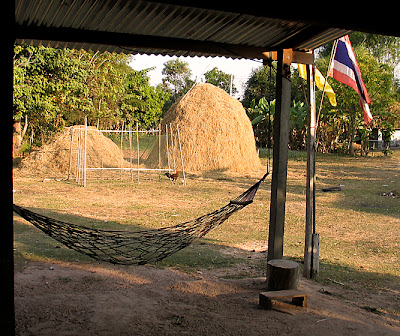 Meanwhile back in les village all is deathly quite. It appears I am the only one crazy enough to be wandering around with my camera in the midday heat. I am eyed suspiciously by drowsy eyes peering from within shady hollows. I can hear snigger's and the words 'ting tong ferrang' (crazy foreigner) being whispered. But being stout of trouser I soldier on regardless, oblivious to all around me, searching for that all important National Geographic front page picture. A scorpion bringing down a fully grown bull elephant or the fabled (only by me) all female nude marathon run.  If only...!
No comments: 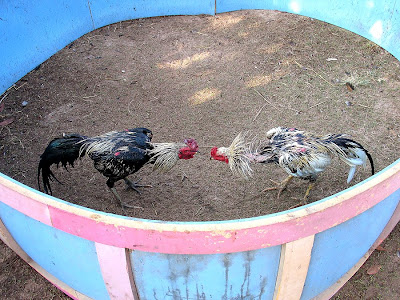 Whilst in n/e Thailand I was invited to view some cock fighting. Now I don't advocate such an event but having never seen anything like it before and seeing as it was sort of put on for my benefit it seemed churlish not to at least take a peek.

The cocks in question were preened for ages and I mean preened. They were washed down with some sort of lime water they had their throats cleaned out with a feather? and generally given a sort of bird spa pampering.

They didn't (thank god) have the usual knives attached to their feet as this was I guess used as a training event. Although I don't suppose the birds knew the difference.

Once thrown together they seemed to know what was expected of them and began pecking at each others backs (you can see the raw flesh in the above picture).

To be honest I got a bit bored after a while but the villagers seemed enthralled to the max. I suppose they don't get to watch much TV and certainly don't have a PS3 or an Xbox.

The thing that struck me the most was that the birds never backed off from each other. They just kept on pecking and pecking. Even if one seemed to be loosing it never seemed to occur to it to run away! It would just keep on attacking and get more bloodied. Maybe the birds were drugged? All the villagers were certainly well sozzled by the end of the first fight. I had to be quite resolute in refusing the kindly offered home brewed Lao Khao (lethal rice spirit).


All the photographs on this site were taken by me and as a result come with copyright conditions attached. Please ask before downloading anything. Thx.

Dave
Traveling is like a drug, once tried it can hook you. There is nothing quite like packing a bag and 'Making like Caine' into the wild blue yonder. The rewards are endless and the memories are with you forever.